Chinese firms operating in the country created approximately 50,000 jobs for Kenyans in 2018, the 2018-2019 Chinese Enterprises in Kenya Social Responsibility Report has revealed.

According to the report prepared and developed by the Kenya China Economic and Trade Association (KCETA) – a non-governmental organization composed of 106 Chinese enterprises operating in Kenya, the member firms created 8,000 more jobs for Kenyans in 2018 up from 42,000 in 2016. In October 2018, for example, KCETA hosted a job fair with more than 50 Chinese enterprises participating and offered over 1,000 job opportunities in engineering, trade, IT, manufacturing and tourism, among others.

“Having chosen to take root in Kenya, many China based enterprises are continuing with their localisation drive. Attracting and training local employees is an important way for Chinese enterprises to integrate into local communities. Chinese enterprises will continue to support the development of local managerial and technical staff members,” the report reads in part.

The KCETA report also reiterated that firms affiliated with the association will continue to offer more job opportunities for locals while recognizing them for their work and achievements as was the case in 2018.

“In December 2018, KCETA hosted an award ceremony recognising 55 outstanding Kenyan employees from over 20 member enterprises for their hard work,” reads the report.

Mr. Wu Peng, the Ambassador of the People’s Republic of China to Kenya similarly reiterated that the creation of jobs would greatly contribute to the country realizing President Uhuru Kenyatta’s Big 4 Agenda.

“Currently there are more than 400 China based firms operating in Kenya, creating many jobs for locals. These companies have played an important role in accelerating the advancement of the Big Four Agenda in Kenya,” the Ambassador Peng said in the report. 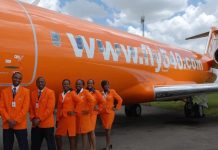