According to the firm, Mr. Kibaara will be taking over from Mr. Frank Ireri who is going on retirement after 13 years at the helm.

Announcing the transition at the company, Mr. Steve Mainda, the chairman of the HF Board of Directors said:

“HF Group is pleased to announce the appointment of Mr. Robert Kibaara as the Group Chief CEO. In his new role, Robert will provide strategic leadership and oversight of the Group’s turnaround strategy.”

“He brings to the Group extensive commercial acumen and strategy execution experience,” Mr. Kibaara added in an official statement.

In addition, the chair of the HF board of directors thanked departing CEO Mr. Frank Ireri for his leadership of the company over the last thirteen years.

“The Board of Directors takes this opportunity to appreciate the outgoing Group Managing Director, Mr. Frank Ireri and wishes him success in his future undertakings,” the statement from the chair of the HF Board of Director reads.

Mr. Robert Kibaara is a renowned banker with over 24 years’ experience. Prior to the appointment, he held several leadership positions including Executive Director – Retail and Business Banking at National Bank of Kenya; General Manager- Integrated Distribution for Southern Africa and General Manager- Personal Banking and New Business at Standard Chartered Bank among other executive positions at Barclays Bank of Kenya.

He holds a Bachelor’s Degree in Banking and Finance from the University of Sunderland (UK) and a Post- Graduate Diploma from the chartered Institute of Marketing (CIM) UK. 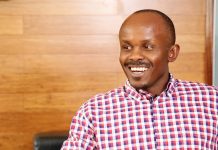